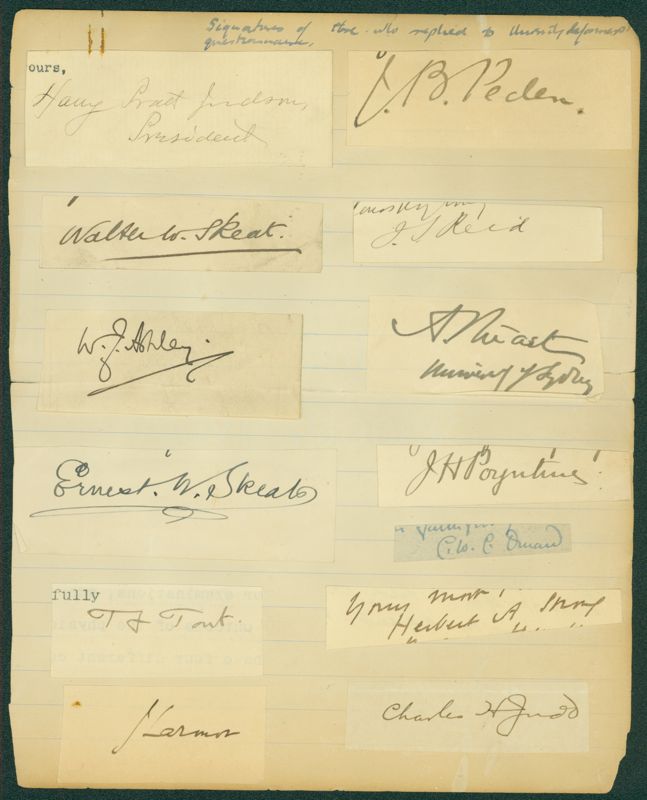 These pages were found in 2009 among miscellaneous historical records at the New Zealand Council for Educational Research, and have been identified and described by the NZCER contract archivist, Rosemary Collier.

Five pages (cut from a note-book). Pasted onto the pages are signatures cut from letters. Pages have been re-ordered to original order, as evidenced by rust-marks left by paperclip. Heading of first page is “Signatures of those who replied to University Reformers’ questionnaire”. Heading is in Alistair Campbell’s (?) handwriting - resembles what is probably his writing on some photographs, and is in a more modern, light blue ink, which would not have been in use in 1910.

The signatures are those of eminent people in the university world; a few have the name of their university below the signature, and one a date in 1910. The New Zealand University Reform Association was formed in 1910, and Hunter worked in it with Thomas Laby, George von Zedlitz, Harry Kirk and David Picken, all professors at Victoria University College (see Beaglehole, J.C. 'The University of New Zealand, an historical study', NZCER, Wellington, 1937, pp. 179-182). In 1910 the University Reform Association sent out a questionnaire to academics in the English-speaking world concerning particularly the question of a University (in this case being the University of New Zealand) being solely an examination and degree-granting body, in which the teachers in the constituent colleges were not involved. Replies were received from 65 academics. The questionnaire and the replies are printed in full in University Reform in New Zealand (Wellington: Whitcombe and Tombs Ltd., 1911), which was “Published by the General Editors (Professors Hunter, Laby and von Zedlitz) under the direction of the University Reform Association”. P. 13 (of 196) refers to the letters, while pp.114ff comprise the Appendix “Opinions of Educational Authorities Abroad on the Organisation and Examination System of the NZ University”, i.e. the letters.

Hunter was founding chairman of NZCER in 1934, and served for 20 years, until his death in April 1953. Other papers which may have belonged to him are to be found in NZCER archives, since they were created or received as part of the work of the Council or of the New Education Fellowship Conference, 1937. It is assumed that these five sheets, which long precede the establishment of NZCER were in Hunter’s possession and at NZCER offices when he died. Since it is assumed that Hunter, for some reason, cut the signatures off the survey responses and pasted them onto these sheets, they have been described among his papers rather than those of the Association.

Research and private study only. Not to be reproduced without prior written permission.